In the second episode of Black Sails, things are heating up as Captain Flint realises that John Silver is the thief he’s looking for. Meanwhile, Charles Vane threatens Max to get him the schedule for Urca de Lima or else he’ll kill her. Eleanor has decided to work with Captain Flint and demands Max to give them the schedule, causing a rift in their relationship. Also, pirates’ accents and historical timelines. Intrigued? Let’s move forward!

But before I go ahead with the review, there was just one thing I wanted to clarify about WHY I’m doing these reviews. I have no agenda to search for the inaccuracies. I have no desire to ‘hate-watch’ anything about pirates. My goal is to find the uses of television shows like these and see what we can take away from history in popular media. We love history and shows like these are important!

The episode starts off the morning after the previous show’s events. Eleanor gets out of bed and we learn that her father, Guthrie (who was killed in the previous episode, remember?) has not been to Nassau in five years and she’s been running the tavern/brothel in his stead ever since. However, with the Royal Navy rapidly encroaching, she fears for the stability of both her business and the island. She needs some form of economic security but it’s remaining just out of reach as the threat of British law looms closer.

And on the note of elusive economic security, Captain Flint admits to Billy the Boatswain and the Quartermaster that he knows Singleton didn’t have the stolen page but he also knows that the thief had been in his office and therefore has to be amongst the crew. The Quartermaster remembers that he met John Silver in the armoury of the ship they plundered (opening of the first episode) and that Silver said the dead man in there had committed suicide. OR HAD HE? Looks like the question of thievery has been solved! Too bad John Silver has excellent powers of observation because he immediately jumps ship when realises he’s been discovered. Once back at Nassau, Silver runs to Max and says that Flint is onto him and that they have to leave for Port Royal that night.  At this point I can’t decide if Silver is smart or if he’s the dumbest man on the show (you’ll know what I mean by the end of this review).  Once upon a time before 1700, going to Port Royal would have been a GREAT idea as the Jamaican city was once the great pirate haven of the West Indies. However, after the 1692 earthquake, the Royal Navy stepped in and took control over the island and scattered the pirate population. Maybe getting away from a pirate haven is Silver’s goal?

Meanwhile, Jack Rackham tells Charles Vane that someone has stolen the schedule for the famed Urca de Lima and is willing to sell it to them for five thousand Spanish pesos. The conniving plot thickens. I can’t help but notice that Rackham’s accent has become very posh. It’s almost jarring. Wait; I just went back and re-watched a clip from the first episode. That’s Rackham’s accent through and through. It is hard to track what a pirate’s accent might have sounded like if he came from a British background. Today’s popular perception of a pirate’s accent is modelled comes from the actor Robert Newton, who was most famous for portraying Long John Silver in the 1950 film adaptation of Treasure Island. He researched his character and found Silver was supposed to be from Cornwall so he modelled his character’s voice from that regional accent. The reality is pirate ships were often multi-national and multi-lingual so a ‘pirate’ accent is unlikely to be different from another sailor’s accent.

Jack Rackham. A mullet, a pornstache, and sunglasses. Priceless.

Another aside. I know I said my agenda wasn’t to deliberately pick apart the show, but ‘Calico’ Jack Rackham didn’t actually show up to Nassau until 1719. Remember, the show takes place in 1715. Also, by the time Rackham had arrived in Nassau, he had taken over and deposed of Charles Vane as captain. So why the inaccuracy? My guess is the creators wanted a good adversary who was also a real pirate in order to show the audiences that real pirates like the show’s characters actually existed. Charles Vane was infamous for his cruelty and known for breaking the pirates’ code. He had had a very public execution in 1721 after terrorising the Caribbean for years. Therefore, he makes a great villain in a television show. However, you can’t really show Charles Vane without Jack Rackham, who’s history is equally as fascinating because he sailed with two women – Anne Bonny and Mary Read. So far there has been no Mary Read on the show, but Anne Bonny has been lurking about.

Also, I literally cannot continue until I point out that Charles Vane is played by Zach McGowan, who played Jody Silverman in the American version of Shameless. I can’t find a a clip on youtube, but his character was the doofiest man ever and it’s a testament to his skills as an actor that I’ve been able to successfully unsee that character while watching Black Sails.

But I digress. Rackham convinces Vane that this will be a lucrative investment but when Vane learns that Flint has arrived at Nassau and that Singleton is nowhere to be found, he realises that his position is no longer secure. Rackham leads Vane to Max, who tells them that Silver will hand over the schedule that night in exchange for payment. Vane does not believe her and threatens to kill her if the hand over goes badly.

Flint arrives at Guthrie’s (I just realised I don’t know the name of the tavern/brothel, so that’s what I’ve christened it) to meet with Eleanor to tell her that her father has been ‘arrested’. She is, understandably, quite upset at this news especially as it now looks like Guthrie’s will be shut down within a day. Flint then tells her about the Urca de Lima and after some contemplation Eleanor agrees to invest with Flint. Only one snag – the schedule is missing! But luckily at this moment, Billy and the Quartermaster arrive saying that they’ve found out where Silver is hiding. Eleanor realises that Max must be in on the thievery and asks her to give her the schedule. Max begs Eleanor to leave with her, but it’s too late – Captain Flint and his company come into the room. Eleanor won’t leave the business, Max doesn’t want to stay now that she has a way out of her life of prostitution and both women are heartbroken. 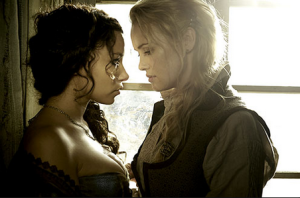 Lesbian love stories are not allowed to end happily.

Only one more snag. John Silver is still nowhere to be seen! The only solution is to hide and wait for him to make the handover that evening. Silver is, unfortunately, a bit too bright and has made the meeting place in the leper/pox colony on the beach. Rackham explains this to Vane (aka, the audience) that the area is full of ‘men who thought themselves too good to use a condom.’ Huh? I immediately thought this to be an anachronism but a quick Google search tells me that the word ‘condon’ was first recorded in 1666 and then in 1705 as ‘Quondom’, so there we go.  Silver makes two diseased men from the pox/leper colony on the beach make the exchange for him. Vane has no patience and kills the first man but before he can kill the second, Billy sneaks up behind Silver and fires at him. Silver runs and disguises himself as a leper and takes out the schedule and begins to read it closely. In the next scene Silver is sneaking away from the beach but is immediately caught by Flint. Flint demands the schedule but AH! Silver is either the world’s biggest coward or stupidly smart because he’s memorised the schedule and burned the actual document! (Historians collectively weep.) It now only exists in his head and thus he has to be kept alive!

In the meantime Max disguises herself and leaves Guthrie’s, but Anne Bonny spots her and follows.

The episode ends with Captain Flint riding up to a house where a lone woman plays the piano. She stops when he walks in and looks at him for a moment before saying, ‘Take off your boots. I’ll boil some water.’ Flint then collapses against the wall in what looks like exhaustion.

So the plot is moving. Betrayal! Heartbreak! Until next time…

PS: I thought I should briefly state which pirates are real versus fictitious characters in Black Sails that we’ve met so far.

Los Angeles-based historian who's expert in all things pirates and public executions. PhD, King's College London, 2017. https://twitter.com/beckalex
View all posts by Dr. Rebecca Simon →
This entry was posted in Uncategorized. Bookmark the permalink.

Expert about all things pirates and executions. Based in Los Angeles.

The latest news on WordPress.com and the WordPress community.