In honor of International Women’s Day, I wanted to write about a female pirate who left her own legacy in history. Much has been written about the notorious female pirates who sailed throughout the eighteenth-century Atlantic, so I decided to write about another woman who became known as a pirate queen: Madame Cheng of the South China Seas.

(I should note that I am writing this in Los Angeles International Airport and I only get 45 minutes of free Wi-Fi, so I hope you’ll forgive me for an obviously hastily-written post!) 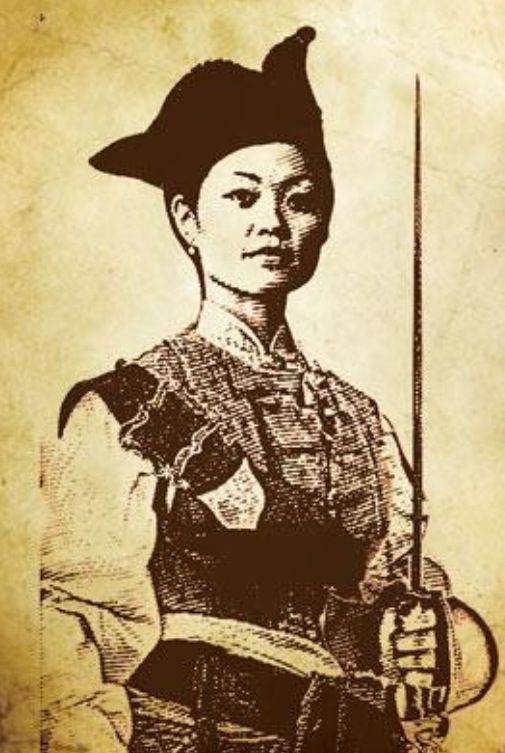 Madame Cheng was active during the first quarter of the nineteenth century and is said to be one of the most powerful pirates in history. At the height of her power, she commanded over 300 ships and anywhere between 20,000 to 40,000 pirates.

Little is known about her early life but it is believed that she was born in 1775 in Guangdong. She worked as a Cantonese prostitute until a group of pirates kidnapped her. It is unknown what happened to her after her capture until she emerged in 1801 as the wife of Cheng I, who was a powerful pirate captain. Cheng I belonged to a family of pirates with origins that traced back to the middle of the seventeenth century.

Together Cheng and his wife managed to create a large allied fleet of Cantonese pirates that became known as the Red Flag Fleet. Madame Cheng’s rise as a pirate co-commander was not unusual. There was a long tradition in China of women who rose to power through marriage. It is also likely that Madame Cheng would have been skilled in the ways of the sea: entire communities lived and worked on boats in ports and rivers throughout Southern China and women played an active role in sailing.

By 1804, under the command of Cheng I and his wife, the Red Flag Fleet was the most powerful pirate fleet in all of China. At this point, the fleet could be better described as a confederation of 400 junks and 70,000 men that sailed under 7 flag. They even operated under a constitution signed by 7 pirate leaders in the South China Seas. However, this would change three years later when Cheng I died off the coast of Vietnam.

Madame Cheng swiftly moved to take over the entire command of the Red Flag Fleet. She married a captured fisherman who had respect amongst the pirates and together they carried out strict code of conduct not unlike the pirates who operated in the West Indies. What makes Madame Cheng particularly noteworthy is her treatment of female prisoners. Women had to be treated with civility and rape was strictly forbidden and punishable by death. Even for consensual sexual relations, sailors had to receive written permission by Madame Cheng lest be they be thrown overboard.

Madame Cheng is unique in that she is one of the few pirates in history that chose to retire and was successful in doing so. In 1810, the Chinese government promised amnesty and pardon to all Chinese pirates. At this point she amassed so much wealth that she decided the time was right to end her career as a pirate queen. She took the government’s offer and kept her loot. She used her wealth to open a gambling house, which she operated until death in 1844 at the age of 69.

David Cordingly, Under the Black Flag: The Romance and the Reality of Life Among the Pirates (New York, 1996)

Joan Druett, She Captains: Heroines and Hellions of the Sea (New York, 2000)

Los Angeles-based historian who's expert in all things pirates and public executions. PhD, King's College London, 2017. https://twitter.com/beckalex
View all posts by Dr. Rebecca Simon →
This entry was posted in Uncategorized. Bookmark the permalink.

Expert about all things pirates and executions. Based in Los Angeles.

The latest news on WordPress.com and the WordPress community.